The previous week, we mentioned Google’s third-party cookie restriction would start in mid-2023 and finish in late 2023. In addition, we summarized important privacy updates from Apple such as email protection, iCloud updates, secure paste, and current location. To read the previous newsletter, click here.

As we wrote the previous week, Apple’s session at the WWDC 2021 was surprising for everyone, especially the security part, which had important updates.

One of the most important updates was the “Hide My Mail” feature that the company announced.

With the new feature, Apple aims to secure the users via restricting the tracking, including the mail opening data, pixel collecting, and opening time data. We know that 40% of the email clients use iPhone-based Apple Mail services, and the new feature worries marketers. Furthermore, their main concern was the possibility of the other companies following those updates and bringing a familiar restriction. We know that Google is working on a similar feature for Chrome called WebID, widely discussed in W3C circles.

Some marketers believe this privacy change has a huge impact on online marketing with challenging the tracking itself.

With the phasing out of third-party cookies and if the customers decide to keep their email data private from businesses, marketing will be radically altered.

As marketers, we know that email marketing has a high ROI. But it seems that working on the lifetime value of a user or a client would be the safest and gaining strategy to follow.

Enhancing those improvements as an industry, combining them with the ecosystem, will focus on data transparency, accountability, and addressability. Those standards will help marketers and publishers build campaigns based on when and how to connect to their customers. Adapting to all those new adjustments will be difficult. But that’s also what marketing is expected to shape within a couple of years. The companies who stand to build a personalized, long-term relationship rather than one transaction will survive. 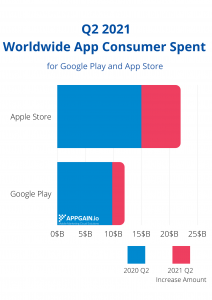 While spending on Apple’s App Store rose by 30% to $22 billion in a year, expenditure on Google Play increased by 20% to $12 billion.

Still, the accelerating digital transformation is accelerating because of the Covid-19 pandemic, but the percentages are promising. Consumers are still getting used to mobile applications; the rate is expected to increase by 20% next year.

To be informed about how to increase the purchase, check our blog!

Android App Bundle Will Be Obligatory For The New Apps

On the 29th of June, Google announced that they would require new apps to be published with the Android App Bundle beginning in August 2021. The blog stated that the goal is to deliver these benefits to more users while also focusing on current Android distribution that benefits all developers. They hope that Android App Bundle will eventually change the APK to the usual publishing format. Even today, some apps are using app bundles, including Twitter, Netflix, and Adobe.

Here’s the table Google used in their blog:

Also, you can find a little introduction video for Android App Bundle:

The launch of Windows 11 was impressive because it included lots of new features. Good news!: With Amazon App Store support, Android apps also took their place in the Windows Store.

You can watch the launch of Windows 11 from the link below:

One of the features of Windows 11 is that you will be able to make upgrades in the background and have substantially smaller update sizes. According to Microsoft, Windows 11 is the most secure Windows operating system.

Meanwhile, the company is still working on the security updates for Windows 10.

0 Commission for the Apps!

Here are some updates in Windows 11 in a nutshell:

We will be writing more about the windows 11 updates related to the apps, Google’s news for developers, and Apple’s actions, especially about privacy.

To be updated about the latest news on mobile marketing, scroll down to subscribe to our newsletter!